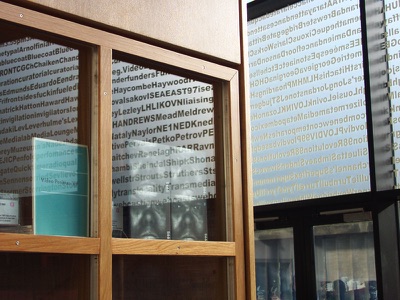 FACT is the Foundation for Art Creative Technology.

The FACT building project was a project to create a national centre in Liverpool for the presentation and production of film, art and creative technology.

At the start of the development of the FACT Centre there was a strong emphasis on maintaining a collaborative design process between FACT and the design team. It was anticipated that this process would result in a building that would reflect the aspirations of FACT through images, sounds and texts as well as the forms, materials and palettes of the building. This approach initially led to the creation of a Lead Artist role for the project whose main task was to work with the architect, Austin-Smith:Lord, to develop a number of features for the building.

The subsequent approach was based on the theme of the self-reflexive building – a building providing features that reflect its life and functions back to its inhabitants.

Many of the resultant features were collaborations that are completely intrinsic to the building design – most notably the external building skin, the orientation wall and many of the internal finishes - but others are external commissions, allowing other artists to respond to the theme through their own distinctive approaches.

In addition, a further project – Sensibilia – was supported through the RSA Art for Architecture scheme and aimed to explore the issues raised when presenting media artworks to those with some form of sensory impairment.

A documentation project for the construction process was also undertaken jointly by Jitender Shambi and Clive Gillman. The results of this were contained in a paper publication 'CONSTRUCT' available from FACT.

Portraits by Amrit and Rabindra Singh

greyworld create artworks for public spaces. Founded in Paris, the group have created permanent and temporary works throughout Europe, America and the Far East. Their work often finds expression through the medium of installation, always closely integrated into an urban context. By forming a relationship to architecture, to sound and to other people, the installations attempt to allow visitors, pedestrians and passers-by the opportunity to become part of the creative process.

The installation for FACT was based on a unique sonic signature for the building, a 71 minute Master palette of specially constructed sound. Sixteen derivations of this palette, each one a modification of the original Master in pitch and scale, were created. These iterations were embedded in fixed assets and elements throughout the Centre, in objects such as the lifts, entryways, and cash registers, to alter their sound, and bring them under the control of one unified compositional idea. The palette variation assigned to each element derived from its position within the horizontal and vertical planes of the building, with elements higher vertically being tuned to a higher octave scale.

These fixed elements become the nodes through which the composition is accessed. As these elements are stimulated - for example, as a door is opened, or a cash till is used - a window is opened at random points on this composition, producing sound in the immediate vicinity at that instant. The size or length of this window‚ is determined by the element to which it is assigned. Frequently used elements will be provided with a narrow gate allowing only brief fragments of the musical composition to emerge. Other objects may provide a longer glimpse at the embedded composition.

This audio palette will also inform other sound producing devices connected with the centre, such as computer themes, phone systems, and audible publicity material.

Tune gave greyworld the opportunity to treat the FACT building as a single work of art, rather than a series of smaller interventions.  The work interrogates two layers of the building, its physical structure and the social architecture of the space. Visitors are taken on a gentle, often subliminal, journey through the composition. Their experience is determined by a number of elements: the route they choose to take through the space, the volume of activity surrounding them and the time of day that they make their journey.

For many the installation will remain a subtle sound work. The main objective being to create a signature, a sonic feeling‚ for the building, an identity often felt unconsciously by its inhabitants. Much of the conceptual framework for the installation will be an irrelevance to those who participate in its performance.

Some may actively seek out elements of the composition whilst for others it will be a wholly subconscious experience, yet one ultimately providing a profound recognition of place.

This project reflects a localised technological and linguistic history pertaining to FACT within the actual fabric of the FACT Centre. The work uses vinyl lettering to fill the 13 glass panels forming the brise soleil at the rear of the building, with a composite set of words formed from the user dictionary files of all the FACT computers.

A user dictionary is a 'live' file which exists on a computer's hard drive and which relates to the spell-check function on word processing software. When the program is checking the spelling in a document and it comes across a word which is not recognised by its pre-programmed dictionary, it will query that word and offer the user: the chance to change the spelling to one it suggests; to ignore the anomaly; or to add the word to the user dictionary so that that word is never queried again in future checks. It is that small decision to legitimise a word permanently within the future working life of the machine (i.e as a word that is likely to recur) that forms the basis of the project.

Over a period of time this file of 'rogue' words lengthens to include anything from proper names to swear words; from neologisms coined by the user to words we may be familiar with which somehow slip under the Microsoft radar (most variations on 'curate' for example). And when the file is isolated and the list of alphabetically ordered additions is viewed, it is possible to see patterns, moments of legibility and vernacular traces of a working life, inadvertently logged there.

In all the incarnations of this work, the idea of presenting these texts in a way that is appropriate to their setting is important, as to a lesser extent is an awareness of the viewer's physical relationship to the work - whether leaning and squinting at tiny text or being physically surrounded by the words. Something in the work that makes their proximity to it potentially matter - that sense of the words becoming readable at the point where the linguistic (and possibly local) experience of the reader intersects with that of the user(s) who have created the dictionary.

In the project for FACT, Graham Parker undertook a sweep of all the user dictionaries in all the computers in the FACT office which were then compiled into a single composite 'dictionary'. This audit threw up numerous words relating to past projects, new media acronyms, regular FACT correspondents and of course text references to the specifics of this building project. As a temporal core sample of the linguistic life of the workers and machines in the organisation, much of it is very richly legible.

Having taken and compiled that list it has been installed as a semi-opaque vinyl text on the brise-soleil panels, so that they partially add to the functionality of filtering the sun, but also take advantage of this functionality to be cast as shadows within the foyer and walls of the building. From a distance the visual look will be almost of a texture rather than a text and the words will fill the surface area of the panels in rows running across the thirteen panels.

Positioning the text so that it is likely to cast shadows means that that cross-section in time of the numerous documents and transactions which have shaped the working history of those computers and ultimately the transactions which have brought about the building itself, can be marked within the structure of that building in a way that alludes to the words' virtual existence. It seems appropriate that despite these words' half-life shadowy status in generic linguistic terms, their role in describing a very particular social and professional process be quietly marked in the building.

For the artist, the proposed title is playful - the 'local heroes' being the words themselves and their usefulness in the context of FACT's past and future, rather than (or maybe as well as!) any specific people who may be mentioned amongst the list. It certainly invokes images of the war memorial or one of those boards listing former Head Girls/Boys etc. and that sense of quietly honouring something is important to the work. 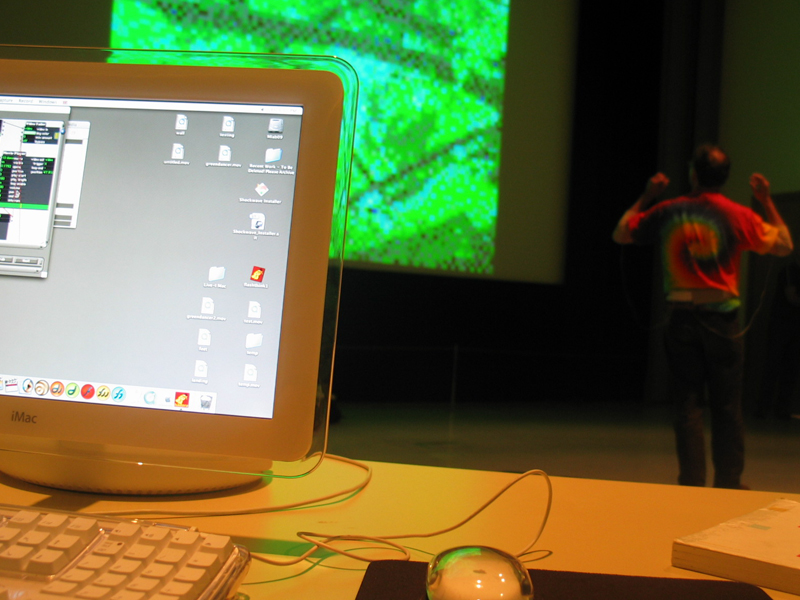 Digital dance workshop in The Box 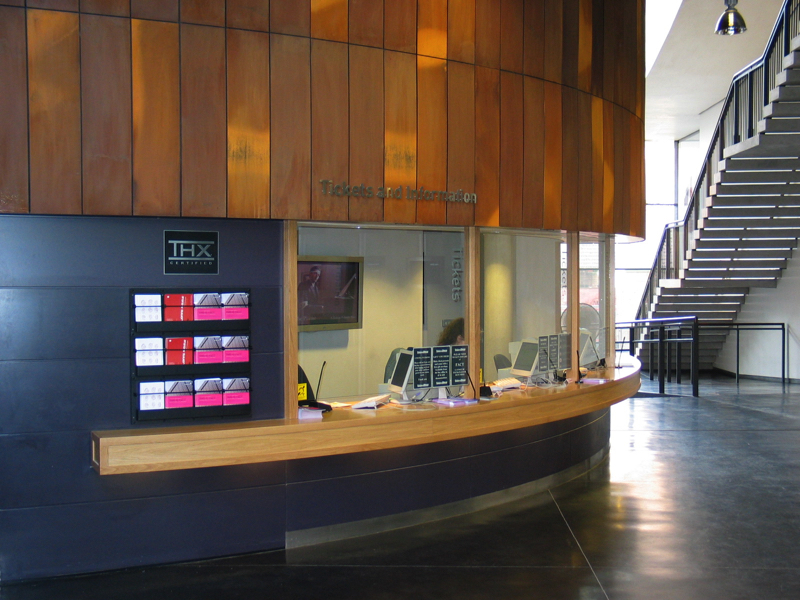 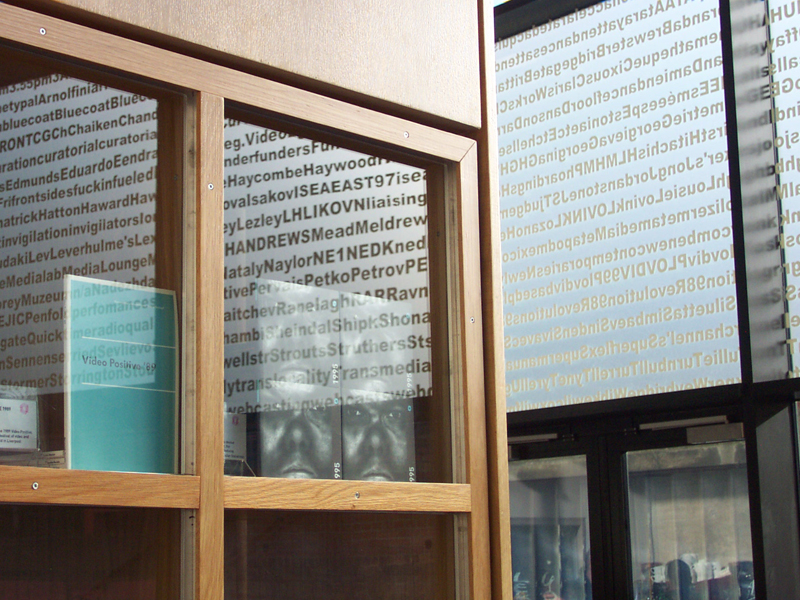 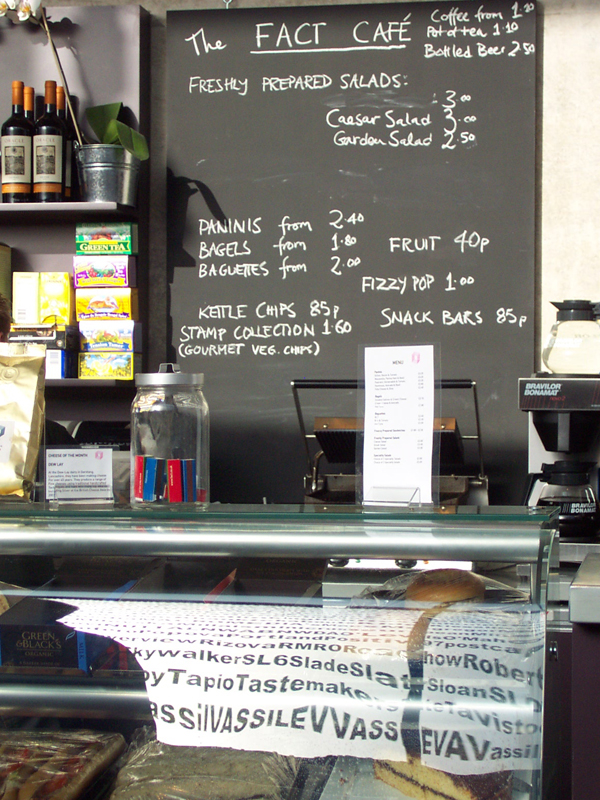 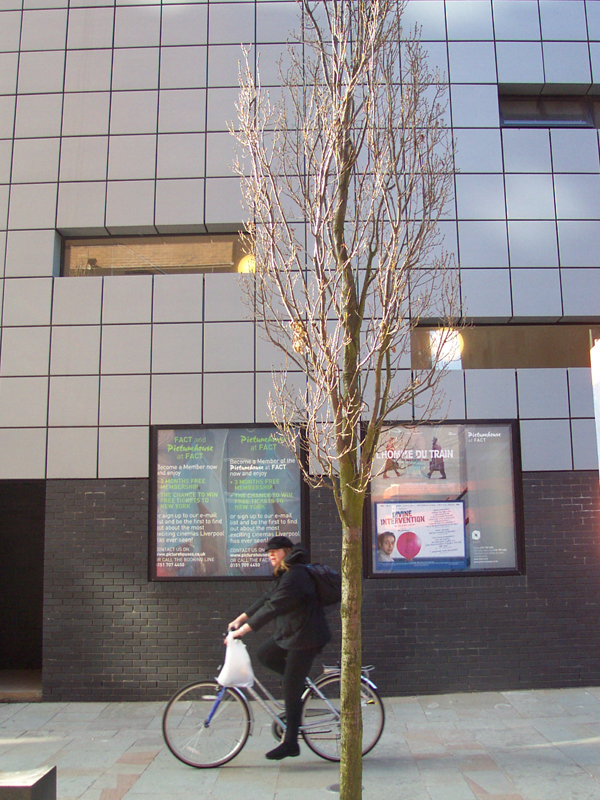 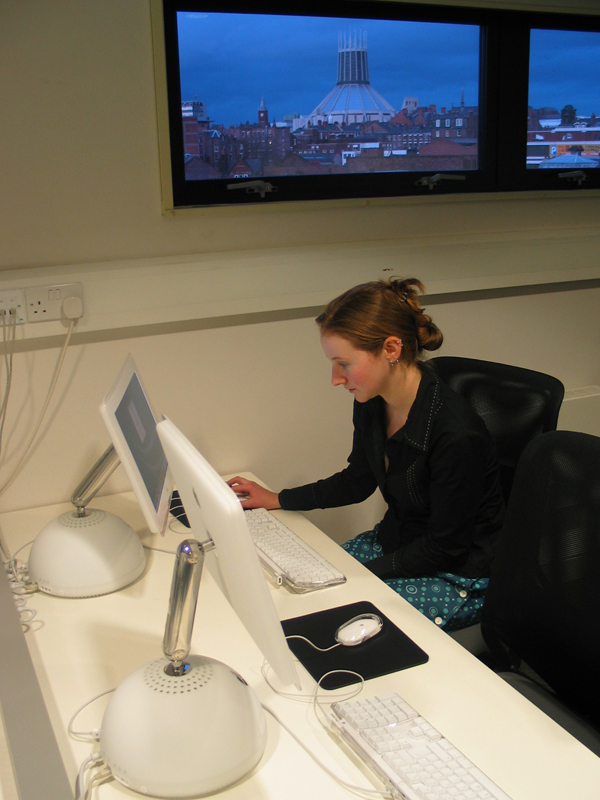 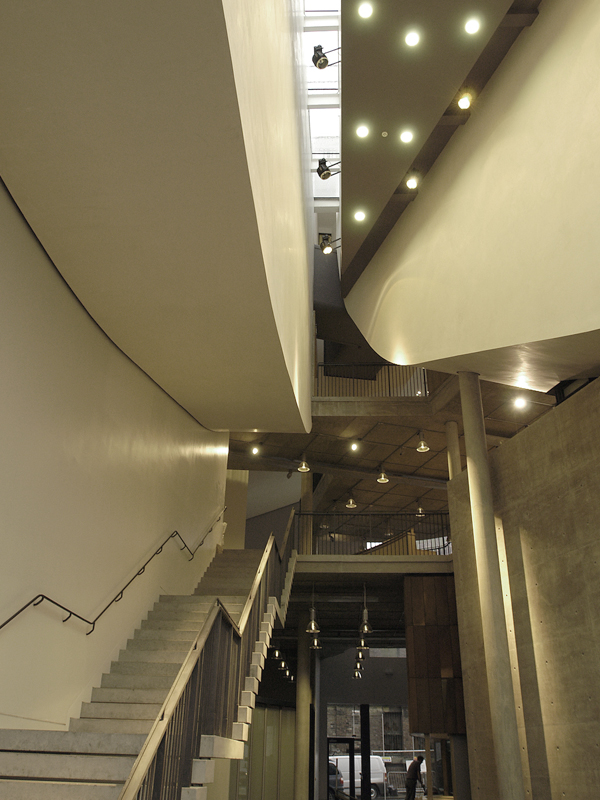