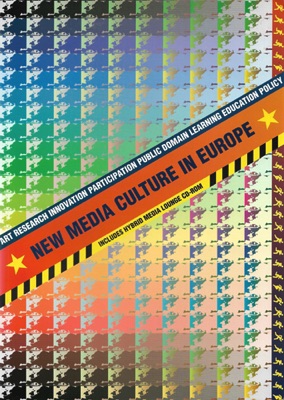 In the course of researching the recent growth of ‘New Media Centres’ in the UK it has become apparent that few of us really know why we might choose to centre a form of practice which is practically and fundamentally dispersed in nature. Theory dictates that creative practice based around computers and networking technology requires no central resource, or a least doesn’t require one that has any particular visibility - especially not in the fashionable centre of town. Network hubs can be located in the cheapest industrial estate, near to good cabling but many miles from any centre of other cultural activity and individual computer workstations can be based at home, or at least very close to home. Theoretically, the technology and its products suffer no major disability in their distribution through being remote from the site of consumption. When was the last time you travelled specifically to use a computer ? Or more significantly when do you think might be the next time ?.

However, the theory is heavily qualified by the many strong feelings that still remain which determine that a Centre is ‘a good thing’. That a flagship is necessary to focus practice, to raise the profile of activity above the disparate elements that might otherwise constitute it. But beyond this few of us seem aware of any clear reason whether or not such centres can actually support our practice. Fewer still have any measures of cultural significance that may have currency in the wider world and can be used to articulate any worth. For the developers of such Centres there is the vanity of leaving your mark, of building your vision in bricks and mortar for the future generations to admire and, of course, our civilisations are often measured by such gestures. Perhaps these gestures are the primary significance, they may be the declarations which slowly serve to shift the gravity from one world to another and mark the ascendancy of one form of culture over another. They may re-engineer perceptions in the hope of seeding or sustaining some interest in a kindled vision. But can they ever hope to serve the more immediate needs of the people for whom they are apparently and expressly meant ?.

The establishment of new media centres raises a fundamental issue in that they are often more expensive to run than smaller, more flexible, incarnations offering the same services. The Lux in London, home of London Electronic Arts and the London Film-Makers Coop, has been built and celebrated as a major landmark on the London cultural map. But it has cost those organisations much more to run than their previous homes and, with the alarming prospect of inherited deficits coupled with increased running costs, has recently come close to bankrupting them. So why is there a drive to invest so much to construct entities which are potentially inefficient and possibly less effective at serving the measurable needs of their stated communities ?.

One reason that is often cited is something that could be known as the ‘proximity effect’ : The ability to be working in physical proximity to like-minded people and to therefore feel more comfortable, to feel ‘at home’. To have your intentions confirmed simply by being given access to a space in which are represented some of your aspirations. This notion differs from that of synergy, as it represents not a desire to work in conjunction with others, but instead to feel they are close by. To know that chance may play a part in enlivening your day.

“You bump into other staff and you bump into people coming in for other needs. Somebody can be using one of our edit suites, somebody else would be coming in to talk about an exhibition, or some programming, something like that, there's just more of a feeling because you’re meeting a lot of different people who are all generally involved with film & video coming in..”

But although this effect is almost never articulated in anything but the most amorphous terms, it does carry immense significance. It is often costing our creative and cultural organisations large amounts of money to sustain these media centres in order to provide for these effects. Given that these centres may provide more opportunities for income generation (more edit suites, more regular cinema programming etc.) one might have expected increased profitability. However, in the year 1998 the combined deficit of LEA and LFMC was such a threat to the organisations survival that they required emergency funding from the Arts Council of England of approximately £200,000. This, plus a commitment to increased annual support, was intended to stabilise their new position, to help them survive and consolidate their position, much of which can be put down to fulfilling the expressed need for “people being close together, and practices being integrated”.

David Curtis, of the Arts Council of England has been very active in sustaining the development of the Lux and understands clearly the fragile balance that needs to be achieved to both sustain and develop practice.

"there ARE arguments for dedicated buildings where there's critical mass, though I think you have to be very clear about WHAT their purpose is. There is little merit in putting artists' studios in a new-built pristine central city site in my view.. I'd post-rationalise Lux on the basis that it's serving as a focus for critical debate in London. If it works as an institution, it will be because its programme reflects the scope of independent activity around the moving image"

The Lux is just one example of the desire for organisations to make their mark in a way that has been little tested or analysed. In the UK, this level of development has become almost irresistible due to the advent of National Lottery Capital funds. Since March 1995 these funds have provided over £888,000,000 of deliberately non-strategic capital monies to develop the national arts infrastructure. Lottery officers (until very recently) have been explicitly prevented, by law, from soliciting applications, or from awarding monies according to any previous national infrastructure strategy. When written down and viewed coldly the policy seems absurd, but it was drafted in an attempt to ensure the new Lottery money was not simply used to replace existing government revenue support for the arts (known as the Treasury stream). The only significant criteria applied through the lottery being additionality (the creation of something that does not or would not otherwise have existed) and legacy (the creation of something that will last). For many organisations this has meant two things - computers and buildings - New Media Centres.

Of those Lottery supported developments aided in this way, many have yet to see completion and are of a scale unprecedented in this country. The c/PLEX development in the West Midlands town of West Bromwich is currently planned to cost £23,000,000 and is aiming not to just provide space for the production and exhibition of work by artists, but to revitalise the town centre of this ailing satellite town of Birmingham and to provide a vital pivot in the towns realignment of leisure and transport services. A huge undertaking that has not daunted its project champion Sylvia King, who proudly asserts that c/PLEX will be “ about access, about a community locally that can use technology, not just new media but lots of art tools to tell stories, to have their say . It’s essentially about empowering people” .

In many ways the hopes and aspirations manifest in c/PLEX represent the wildest fantasies, driven through by dogged determination and commitment, in an attempt to achieve a vision built on many years of practical experience of community arts delivery in that town. It is a vision almost Soviet in its scale and it continually fails to be dragged down by the bureaucratic ordeals that are placed in its path.

Other developments in Liverpool (The FACT Centre), Huddersfield (Kirklees Media Centre) and Hull (C.E.P.I.A) have aspirations to wide effects, often fundamentally regenerative. Support for the development of these centres are premised on social and economic expediencies in which regional development funds provided through National and European Governments are being used to lever arts money into projects. The commitments necessary to access these funds creating a wide range of consequent outputs against which these developments must be measured. Although Lottery funds are available in relatively large quantities, it is still necessary to raise matching funds of at least 10% of the total costs from other sources. To locate this magical match and unlock the funding often involves Faustian pacts between project champions and otherwise philistine local councils and Quangos (Quasi Autonomous Local Government Organisations). The pay-off for the match often being reluctant commitments to poorly developed training strategies or short-term employment gains. Many of these organisations (with notable exceptions) otherwise having little or no sympathy for the arts. As Mike Stubbs, of Hull Time-Based Arts says of the CEPIA project,

“I am a pragmatist at heart. The bottom line is that I would much rather end up with a good home for Time-based Arts, new facilities, nice offices, good cafe/bar and a media centre for the more general community living in Hull. I’d rather end up with that than nothing. Maybe there is potential for development in the digital global world, we still use some of that rhetoric in the context of CEPIA, but I necessarily don’t believe it. I don’t believe we are going to end up with global virtual digital businesses, or that they are going to be discrete or distinct from any other kind of business or any other way of life. You don't blow away the old business. You just find new ways of mediation, of expression of ideas and transactions”

The expectations these processes raise can be quite awesome, especially when the ambition of developments like CEPIA are placed in the context of centres like the NTT Intercommunication Centre (ICC) in Tokyo or the Zentrum fur Kunst und Medientechnologie (ZKM) in Karlsruhe. Which, as the Director of its Institute for Visual Media, Jeffrey Shaw says,

“the luxury of the ZKM is its relative wealth and because of that its facilities are really very good, very high end and the justification is that this is the place where artists would come if they need access to these kinds of machines which are otherwise rare and expensive to have access to ..... artists can come and go as they like, the place is open 24 hours a day, 7 days a week, the intention is to create an optimum environment for creative activity.”.

The luxury of this stance being the DM16 million the centre receives each year from its local and regional governments. The wealth of this position contrasting pitifully with the obligations to short term job creation and low quality training outputs that many UK organisations have to commit to in order to unlock sources of support. The reality being that, in ZKM, the governments of Karlsruhe and Baden Wurttemburg have created a world beating facility that has raised the global perception of what might otherwise just be an anonymous medium-sized southern Germany town. Capitalising on a vision they have constructed a world-leader, investing in their confidence to create a response to an emerging technology and its creative exploitation. Building on a visionary concept to emerge with a set of opportunities which could not have been predicted at the start, but recognising that regeneration is as much about leaps of faith as about pragmatism.