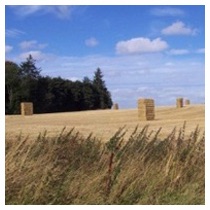 essay on 'Callous to Misfortune'

"For in and out, above, about, below,

'Tis nothing but a Magic Shadow-show,

Play'd in a Box whose Candle is the Sun,

Round which we Phantom Figures come and go." 1

For his work 'Callous to Misfortune' Clive Gillman has chosen to utilise the form of the slide show, as a means to present landscape images from Gallow Hill, Angus. Superimposed upon the slides are texts chronicling the final words of condemned inmates on death row in Texas, before facing execution. Alongside, a panel of text carries a quotation from Cesare Beccaria expounding on the injustice of capital punishment. 2

Here we see the artists' fascination with intertextuality which has been explored in many of his works. 3 The interplay between text and image, the layering of meanings formed through juxtaposition forms a dialogic performance within the space of the work. As Nicholas Bourriaud has suggested "Making a work involves the invention of a process of presentation. In this kind of process, the image is an act." 4 'Callous to Misfortune' explores historical and philosophical confluences around punishment, injustice and death, through creating connections between texts which do not have direct geographical or temporal relationships.

Constructing translocal linkages between the historic resonances of a specific locale, the heartfelt despair of prisoners awaiting their fate, and moral argument against the cruelty of execution, Gillman makes a strong statement: an act of remembrance. He positions image and text as markers, part of our collective memory. The work reflects upon the process and implementation of law, the effect that unjust laws have on the common people, the poor. "Who made these laws? The rich and the great, who never deigned to visit the miserable hut of the poor," is Beccaria's impassioned rebuff to the inhumanity of the State. 5

Gillman's use of the conventions of the slide show bears echoes from another artist concerned with injustice, namely the late Bill Douglas, whose cinematic account of the Tolpuddle Martyrs 6 used the transitions of the magic lantern show as a central metaphor for the forces of history and the desire to transform society for the better.

1 - From FitzGerald's translation of the Rubáiyát of Omar Khayyám, quoted by film-maker Bill Douglas in 'A Lanternist And His Comrades', The New Magic Lantern Journal, volume 5, number 2 (August 1987)

6 - Comrades, 1986, Douglas, Bill. The film tells the story of impoverished English workers in the 19th century and their transportation to Australia for forming a trade union.