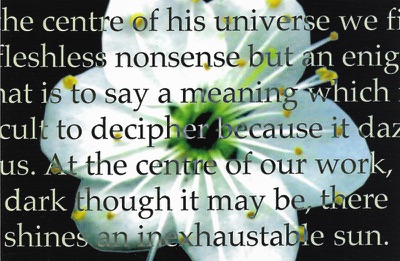 Heliotrope was an interactive artwork that uses as its theme some writings by Alhbert Camus, the Algerian-born author. His works often featured the extreme north African sun as a symbol for the futility of any attempt to interpret and represent the fundamental forces of nature. This work, with the computer functioning as a mediating device between the user and the images, echoes this idea. The poetic texts being revealed by playful interaction with some symbols from nature, yet the texts themselves reflecting upon the vanity of interpretation. That the user, like Camus, is torn between the fundamental sun and its rationalisation. That any interpretation or mediation device, such as the computer - or even writing itself - while offering us the chance for expression, can also simply distance us from the force itself.

Heliotrope contained 4 main sequences featuring the almond blossom, the almond, the bloodstone and the heliotrope itself.

The heliotrope is a Mediterranean flower which is named after its tendency to follow the sun.

This heliotrope is a view of the sun as viewed from a empirical northern European perspective. The giver of light and life, yet often the assailant of our senses and the destroyer of our rationality. By creating a search for resolution in the form of a puzzle in which the sun is the central reference point, the piece sets up a premise in which we may rationalise our relationship to its fundamental power. In the piece we mediate the elemental through technology, yet can never fully resolve anything but our relationship to the technology itself. The element remains elusive and undefinable.

The Heliotrope is a plant indigenous to Europe and North Africa, named after its tendency to follow the sun. In myth it is Clytie, who was turned to a flower and forever watches her lover, Apollo, moving across the heavens. As a concept, heliotropism may be taken to mean a search for the sun, the striving to understand and recognise some kind of universal energy or lifeforce which manifests itself in the sun.

This concept finds significant expression in the writings of Albert Camus, who, despite being better known for his novels on the myth of the outsider, makes great use of the heliotrope concept in his short stories and essays. Often depicting the sun as a great signifier of universal truth and expression. This might be attributed to his early life in north Africa, where as a second generation French colonist subjected to the extremes of the African sun, he responded to its power and influence in his early essays and short stories. Often writing about fine details of Algerian life, but constantly illuminated by a reverence towards the heat and light of the sun. As if his words, whatever they may be describing, are always written on the same sun-yellowed paper.

Few of us in northern European climes have ever lived with the extremes of the burning sun and view it instead from a safer position, its raw heat moderated by distance to become a cerebral, rather than sensual, symbol. Knowing its power rather than feeling it. This culture has led to a curiosity and value being placed upon those artworks that are produced from an engagement between northern temperament and southern extremes (e.g Van Gogh, Shelley, Conrad etc.). In many of these works a romanticism is bound up with the madness that is seen as an inevitable result of flinging northern rationalism upon the sensual extremes of less temperate cultures.

It is curious and significant that in Camus, we have the expression of the mystical and passionate filtered through a northern rationalism to produce a body of work whose psyche is constantly wrestling with the location of the sentient being in an unknowing world. His heliotropism is the hypnotised gaze of the displaced, yet acclimatised northerner, shocked at the power and significance of the southern sun, yet unable to fully submit to its omnipotence. An experience that is echoed through the most prosaic approach to contemporary sun worship. Hot, but too hot.

In this piece the heliotrope and its symbols can be seen as the northern European culture, with its trophies of empire, but forever in awe of real life beneath the sun. The user who experiences the piece is balancing symbols and rationalisations, playing with the elements to try to sustain a singular vision. Trying to create a rational understanding of the world around them by searching for meaning in the apparently systematic. Trying to keep the sun in the sky through empiricism or through poetry or play, but ultimately unable, as Camus says "to love and purify oneself in the confused music of the heat and the sun".

At the core of the work is this dilemma - the acknowledgement of the pointlessness of rational creativity, yet rapt by the process of rationalisation.

John Donne, writing in An Anatomy of the World;

And new Philosophy calls all in doubt,

The element of fire is quite put out;

Sun is lost, and th'earth, and no mans wit

Can well direct him where to look for it.

Heliotrope was produced through the Film & Video Umbrella with support from the Arts Council of England, North West Arts Board, Photo98 and Bradford City Council. It was exhibited at Cartwright Hall Bradford, Artezium, Luton and Folly Gallery, Lancaster. 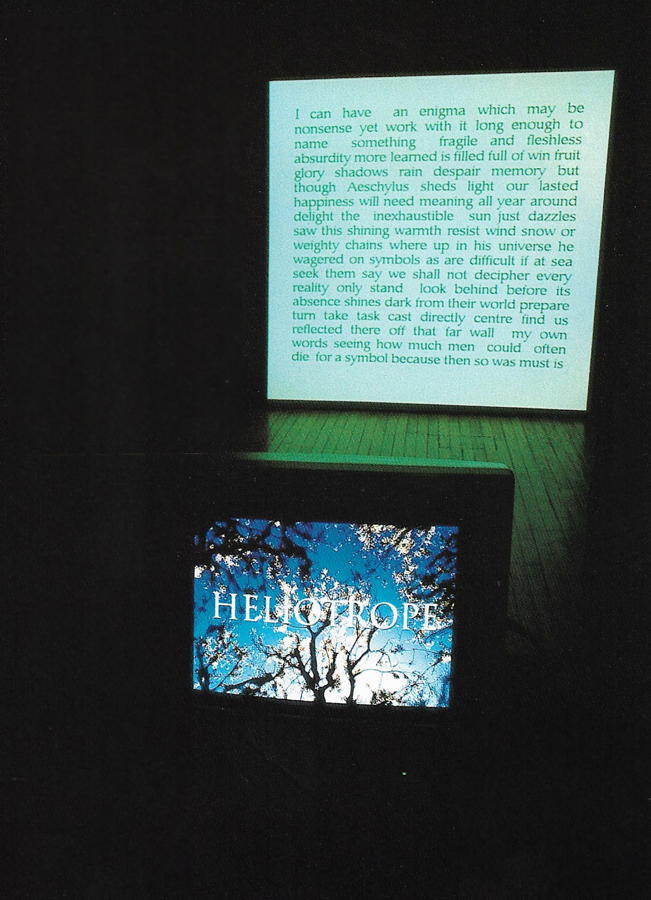 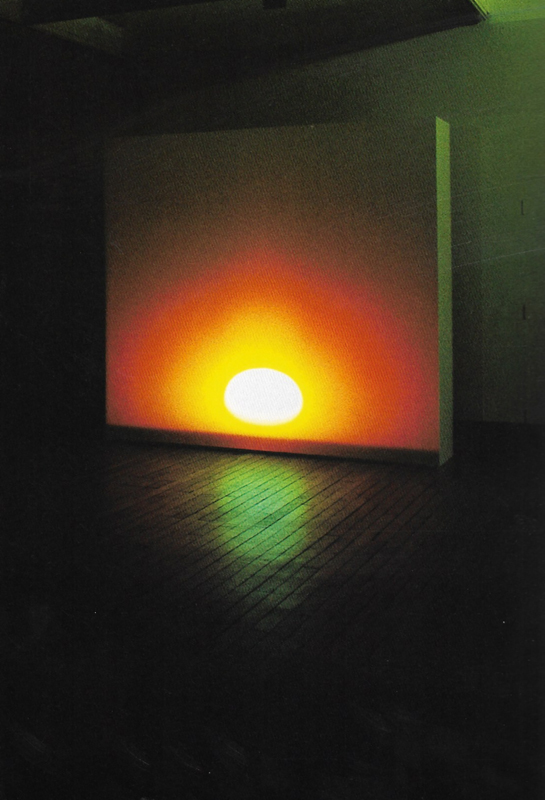 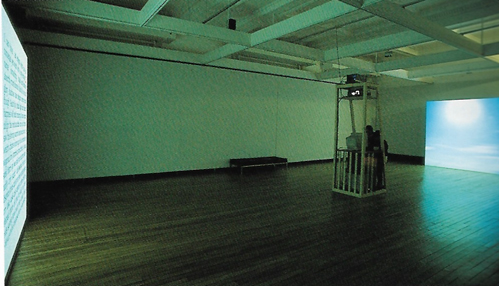 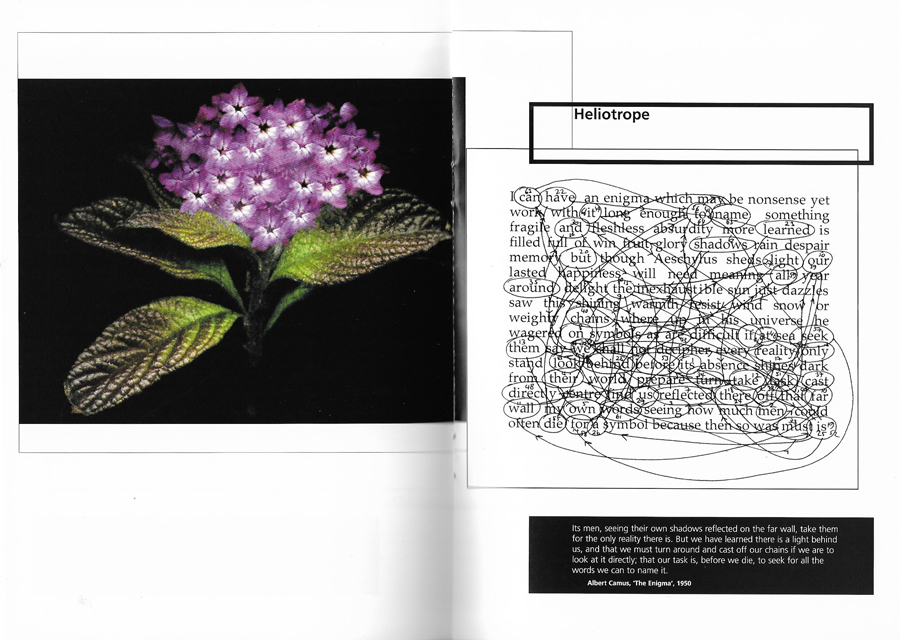 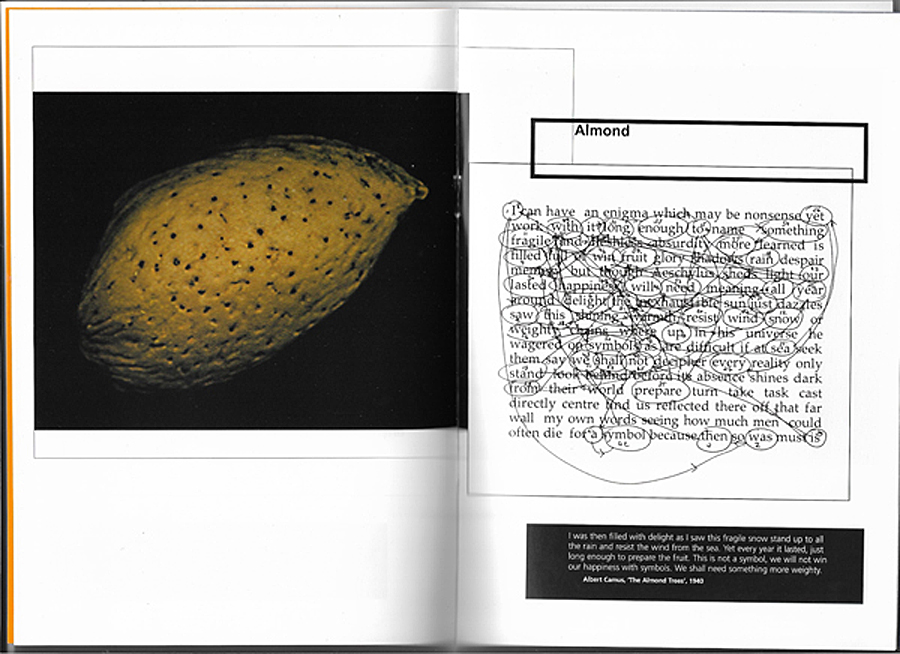